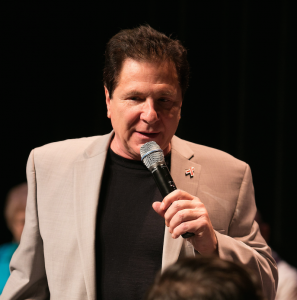 DeLuca earned a Masters Degree in Psychology from the University of Illinois. While working as a therapist, he also began performing before local civic groups; then went on to hone his skills as a stage hypnotist throughout the mid-west before gaining national prominence.

Tom DeLuca brought his Corporate Hypnosis® show to businesses and associations across America where his intense touring schedule led him to a breakthrough discovery in the stress and burnout prevention area: The Power Napping® Workshop for Less Stress. He later created ImaginACTION, another real benefit program that teaches you how to de-stress your body as you energize your mind.

“Knocked our socks off!”